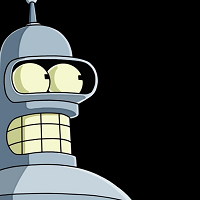 Block Dude was one of the CTF challenges on offer at BSidesCBR 2019, hosted by CyBears. It appears to be a simple pygame. We are given a tarball with some source, a shared object and some game resources, along with a simple commandline to spawn the game. OK so lets get the flag. 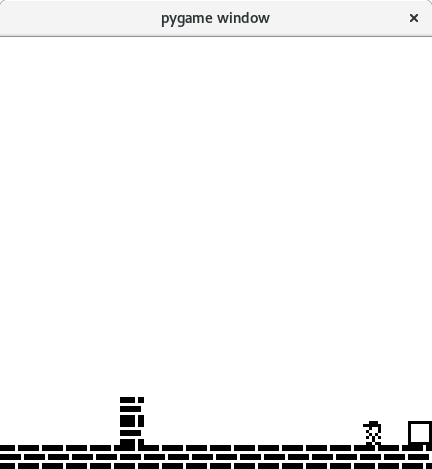 If you want to attempt this CTF challenge yourself stop reading here.

After extracting the tarball I had a quick play with the game. Its a simple platformer. I can move the character around and there is a wall impeding our progress to the left and a block at the far right of the game. I mess around for a little bit not discovering anything. At this point I’ve got no idea what the objective is. I know I need to get the flag for the CTF, maybe just finishing the game will give me the flag? Do I simply have to bypass the wall to do that? Time to look at the game code and see what I can do.

Not much here. Its just taking user input UP, DOWN, LEFT, RIGHT and drawing the game map tiles based on what is supplied by the server. I notice there is DOOR tile that I haven’t seen yet. Still no idea how to play the game, let alone get the flag.

Time to see what else we’ve got. Lets go for the source code first.

OK this appears to be a header for the server-side portion of the game.

There is a an extern for the map state global.

And the game state struct.

This struct is very suspect, it has so much potential. Integer overflow for the u8’s, negative index into blocks and maybe I can modify the update function pointer, or overflow blocks to overwrite stack or heap memory. The TODO kind of points toward the last option. NOTE: at this point I haven’t even figured out how to create a block, maybe 8 blocks is enough?

I definitely need to have a look at how this struct is used, and especially how the blocks member is accessed.

This is a source file for the server-side portion of the game (despite the name client.c). We can see that is implementing functions defined in the blockdude.h header, and updating the games state.

A quick browse through the source code and I see this

What! Thats how you pickup a block! Just stand next to the block on the screen and press down. Feeling pretty stupid right now. Time to play the game again with this new info.

So… You pickup and put down blocks to build stairs over the walls (theres two of them) then walk out the exit door to finish the game. No flag but at least I now know how the game works.

This is a shared library that is loaded by the server-side of the game. It implements functions that are defined in blockdude.h and is the complied version of client.c plus some more stuff, as can be seen here:

Of particular interest here is the debug_flag function. Heres the flag. I take a quick look just in case… but it reads the flag from a file called flag.txt on the server.

Time to take a look at how that dodgey State struct is used.

Its allocated on the stack in the main_loop function.

So how do I overflow blocks? The only place it is used is in the update_south function.

Analysing this function I see that when dropping a block the cur_block member is used to index into blocks and set the x and y coordinates of the block based on where “Block Dude” drops it.

I also see that spawning a new block simply increments num_blocks without bounds checks and that the initial location of the block is not set (see the TODO). This means that when I spawn block 9 (remembering there is only enough space for 8 blocks in the State struct) it’s x and y coordinates are intially the lower two bytes of the return address of main_loop, and if I spawn block 10 its coordinates are the upper two bytes of the return address. Nice I have an info leak! lets give it a go.

I spin up the game and immediately spawn 10 blocks. Hey one block is floating in the air but where is the second one? Oh… the one in the air is block 9. Block 10 is rendered above the characters head until block 11 is spawned. So after block 11 is spawned I have two floating blocks. The location of these two floating blocks is actually telling me the return address of the main_loop function! 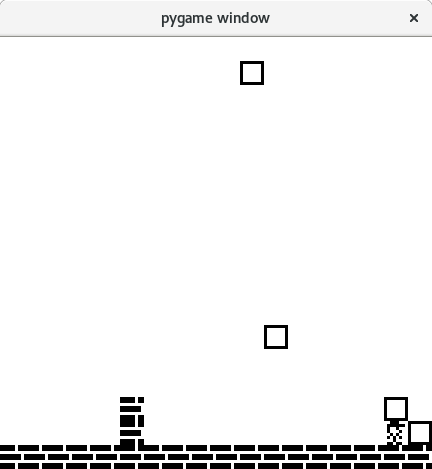 It is also interesting to note that after doing this several times the locations of the floating blocks changes so we can’t just overwrite the return address with a static value. They also always land in the game windows (well done to the designers of the CTF challenge, thats very neat!)

Modifying the return address of main_loop should a be simple matter of picking up blocks 9 and 10 and dropping them somewhere else. May as well give this a go.

So I spin up the game again and when box 9 spawns I move the character to a random location and drop the block. Then finish the game (the main loop returns when you finish the game) and sure enough the connection to the server drops. Looks like I have a crash!

Heres the plan: Spawn 10 blocks minimum, move blocks 9 and 10 so they point at debug_flag and finish the game.

So how can I reliably set the return address?

The function that calls main_loop is client_game. Hey… it also seems to be ‘allocating’ 1024 bytes on the stack and zeroing it, then not using it at all! Lets draw the stack for main_loop

This means that there is 1K of slack space after the return address that won’t affect the process if it is modified. I can use this space to spawn up to 512 additional blocks! NOTE: I realised while proof reading this that although there is space for 512 blocks in the ‘slack’ space the maximum number of blocks that can be spawned is 256, since num_blocks will wrap.

So I go back and review the code, looking at how dropping a block sets the x and y value of the block and how this can be used to modify the return address of main_loop and eventually forehead slap myself when I realise how simple it is. Ready for it? The return address of main_loop can be modified to point at debug_flag by moving block 9 just nine places to the left in the game and dropping it.

Oh and I have up to 254 blocks available to help me with moving the block.

I could have scripted up the python client to do a ‘speed run’ and perhaps I would have if things went differently, however, I was feeling relatively confident that this might work (notice all the qualifiers here) so I just decided to have one shot at playing the game out.

So heres how the game went:

You May Also Enjoy